About Us > A History of the Place (Press for more) 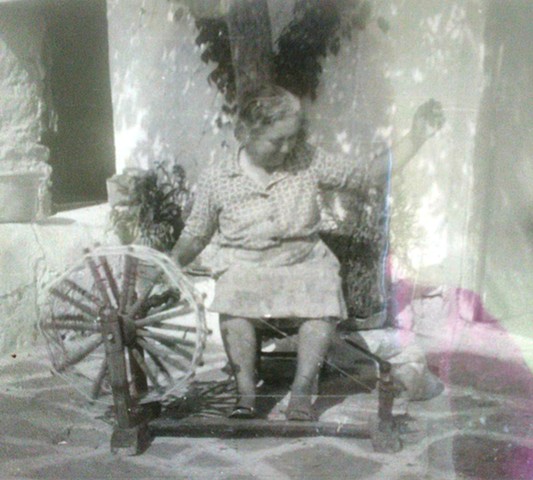 About the Cycladic Arts Artists-In-Residence Space: A history of the place.

A traditional Cycladic house built in 1925 has been renovated to become the Cycladic Arts Artist-In-Residence Space. Once the home of Kostas and Moschou Skandali, who raised twelve children there. Kostas (born in 1900) was a fisherman and an entrepreneur who always had his four sons from the age of five with him. Moschou (born in 1903) and the daughters remained at home to do the housework, agricultural work (olive grove, vineyard, cobs, tobacco and cotton fields) and to care for the few animals they had (chickens, goats, and sheep).

During and after the 2nd World War, the political and financial situation on the islands and in Greece in general was very difficult. Times were difficult for everyone and many people immigrated to other countries in search of a better future. Two of the family's children immigrated to America in the 70's, while some of the daughters were sent to Athens from a very small age as housemaids and nannies. Two of them were dressmakers on Paros with apprentices who they taught the profession. The older one (born in 1926) later moved to Athens to work as a dressmaker there. The remaining daughters who stayed on the island worked on the family land, or just helped their mother raise the newborn babies and then got married to create their own families on Paros. In the 60's, two of them went to Athens to become hairdressers.

Kostas and his sons were one of the first who owned two boats: one for fishing and one for trading goods between the isolated islands during these times. With the trading boat a variety of goods, from animals to construction materials, to wheat and hay, vegetables and fruits, were transported from island to island, and to and from the main port of Piraeus. Passenger ships and ferries were very rare, so families on these islands depended on the family boat for their basic necessities and food. Some islands like Folegandros, Astypalaia, Santorini and Sikinos didn't even have wheat to bake bread, so the boat was seen as an angel who could feed them. All of the sons were working as fishermen or businessmen, except the one who immigrated to the United States, and became a painter.

Despite the poor years and their hardship, Kostas' and Moschou's house (shown in the above picture) was always a hub, one of the very few houses in Alyki back then. Locals from other villages and other relatives would visit them on foot or riding their donkeys or mules to say hello, eat (especially during the 2nd World War) and share their news.

The coordinator of the Cycladic Arts Program, Dimitra Skandali, is one of the 31 grandchildren of this couple, the daughter of Stephanos Skandalis, who is one of the four sons of this big family, an entrepreneur and a fisherman.