About Us > About the Coordinator (Press for more) 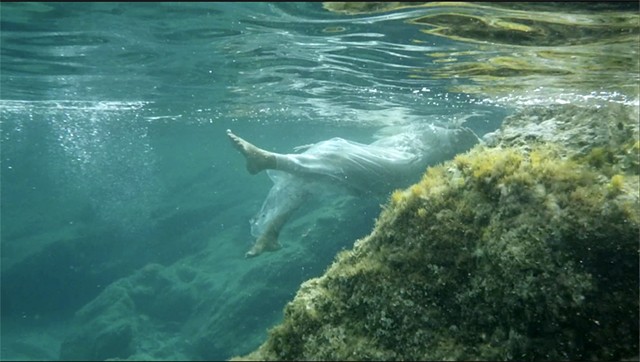 Still from a video by Yuki Aoki About the coordinator of the Cycladic Arts Program:

Dimitra Skandali is a multimedia artist living and working on Paros. She has been working in both the United States and on the island of Paros, from 2011 until 2019. She was born and raised in Alyki, a small village in the south west of Paros, where the Cycladic Arts Artist-In-Residence Space is located. She is one of the 31 grandchildren of Kostas and Moschou Skandali, who owned the building and the daughter of Stephanos Skandalis, one of the 12 children of the couple.

Growing up in Alyki, she was exposed to very few cultural events until her late twenties. Her own attraction for the arts appeared relatively late in her life. Her thirst to discover new worlds, expand her horizons and acquire new skills in the field lead her to pursue her first degree in Painting at the Athens School of Fine Arts in 2010, attend a year-long exchange program in HKU Utrecht, the Netherlands in 2009, and pursue her Masters of Fine Arts in New Genres from San Francisco Art Institute in 2013. Since then, her dream has been to bridge the disparate worlds she has lived in, bringing together creative people from different parts of the world to create a safe haven for artists to connect and interact so that people of all ages on the island of Paros –especially young kids- will never feel the limitations she experienced in her youth. 'I carry my island with me everywhere and it shapes the way I see the world' she states. She creates installations weaving together found elements from diverse locales to create ethereal forms in an ever-expanding web, even if only temporarily.

Her dream is to facilitate a dialogue between the International and Greek artist communities and to help put Paros in the global contemporary art scene with annual or biennial exhibitions both in Greece and abroad. The Cycladic Arts Program is the vehicle for this dream to come true.